Unpredicted weather conditions can have a significant impact on your entire routing operation in a number of ways. Such weather conditions as heavy snows, strong winds, low temperatures, rains, etc. may cause delivery and visitation delays, undesired rescheduling, damaged equipment, or even pose danger to your field team members.  Route4Me allows you to check live weather conditions in your service area so that you can prepare in advance for any severe weather that you and your team may encounter when completing routes. Route4Me’s Android Route Planner supports a variety of visual weather map layers that can project visual weather conditions overlays over your routes.

Moreover, Route4Me’s weather map layers project visual overlays over your routes in real-time so that you always get live weather information for your service area. Thus, for example, you can use the snow depth layer to check if your trucks will need to have chains on their tires for more grip or use the rain layer to check if your team will need to put on special rain gear when going out into the field.

To open weather map layers over a particular route on the map, first, open this route and then tap on the route’s map next to its name or on the map icon in the navigation menu. 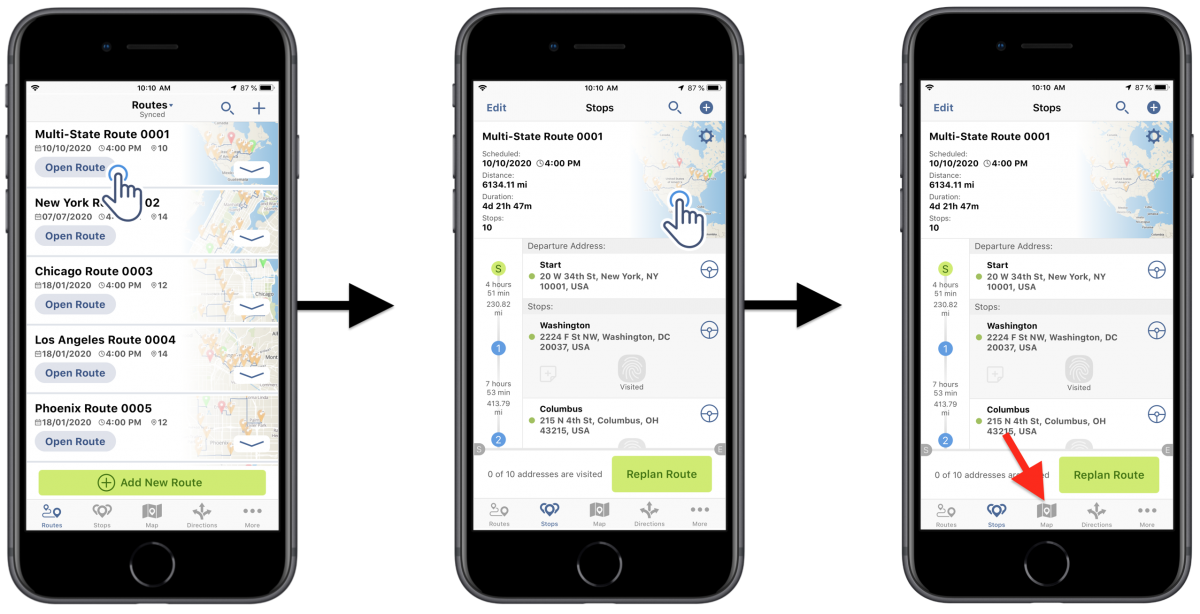 Next, tap on the weather icon in the top right corner of the screen, select the preferred weather map overlay from the list and then tap on the “Apply” button accordingly.

Radar: Displays on the map the radar overlay that differentiates between rain, snow and a rain/snow/ice mix (gradient). 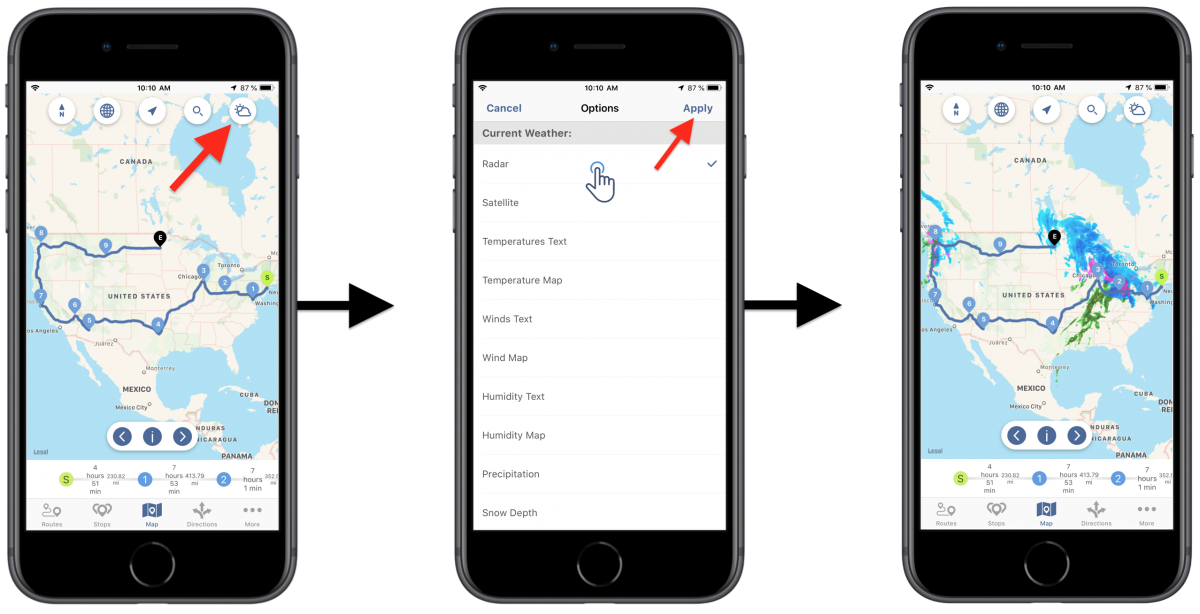 Satellite: Displays the visible satellite overlay of clouds over the map (movement of clouds photographed from the space). 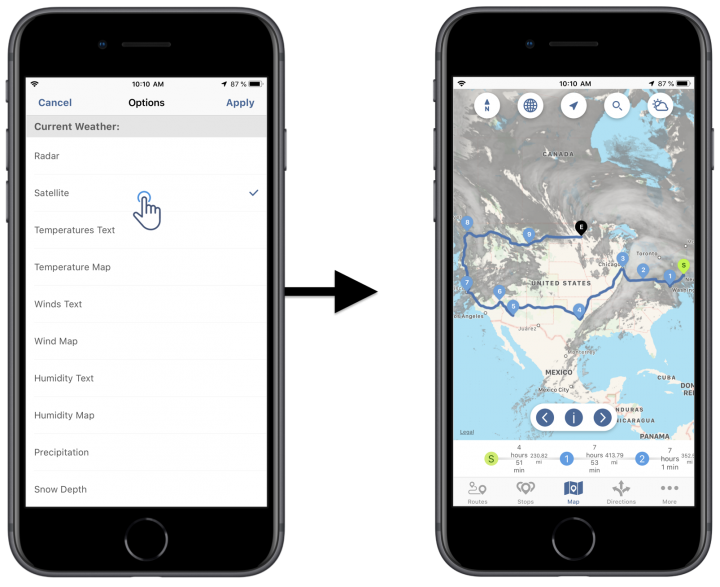 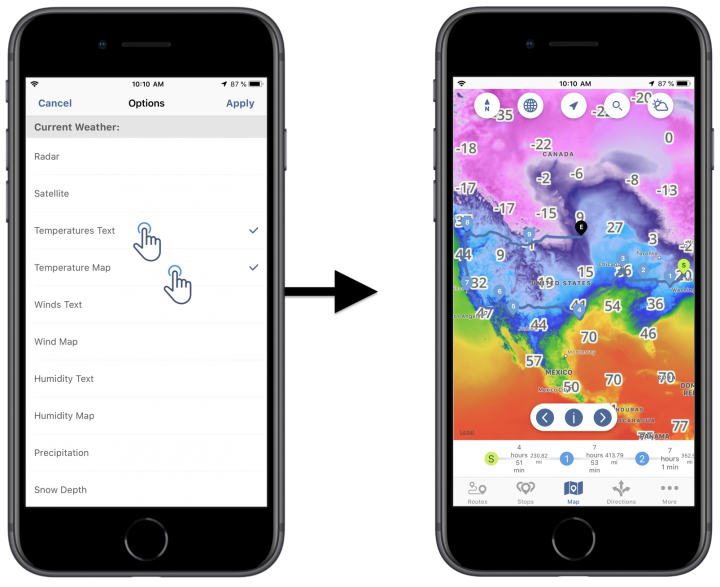 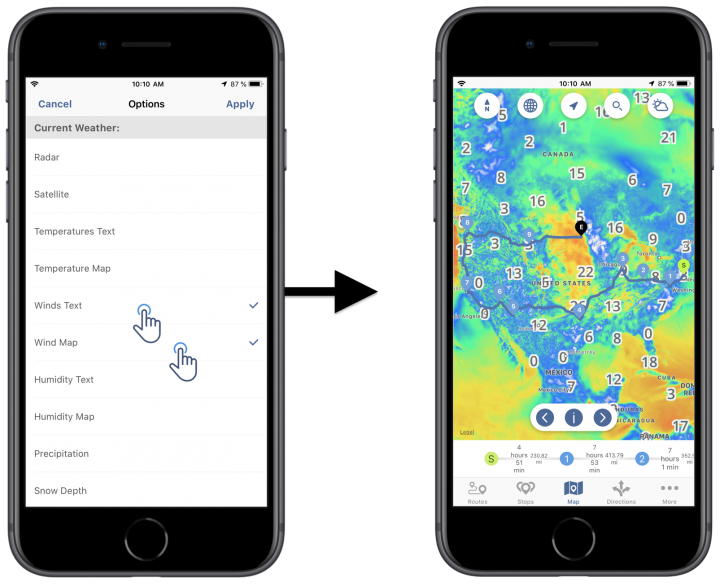 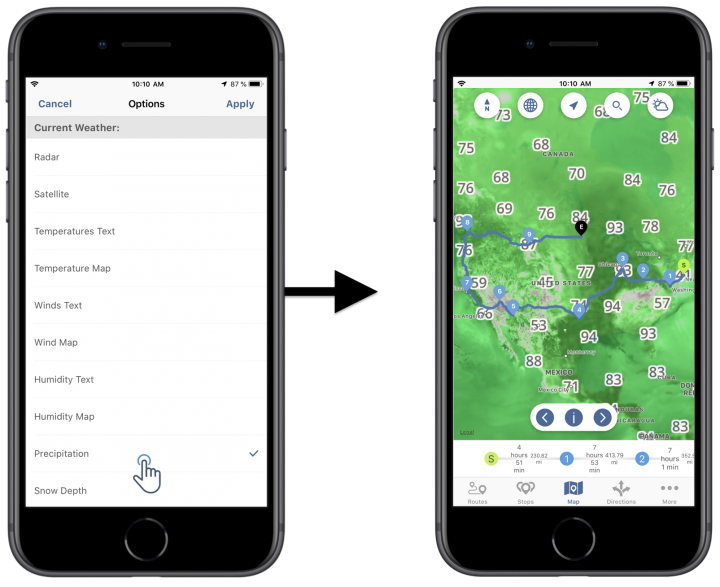 Snow Depth: Displays the current snow depth observed on the ground as a gradient on the map. 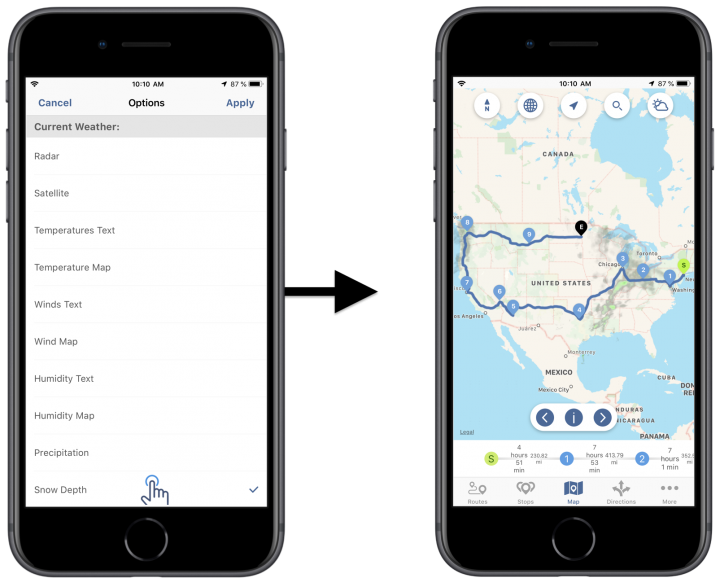 Visibility: Displays the current level of on-land visibility (fog) as a gradient on the map. 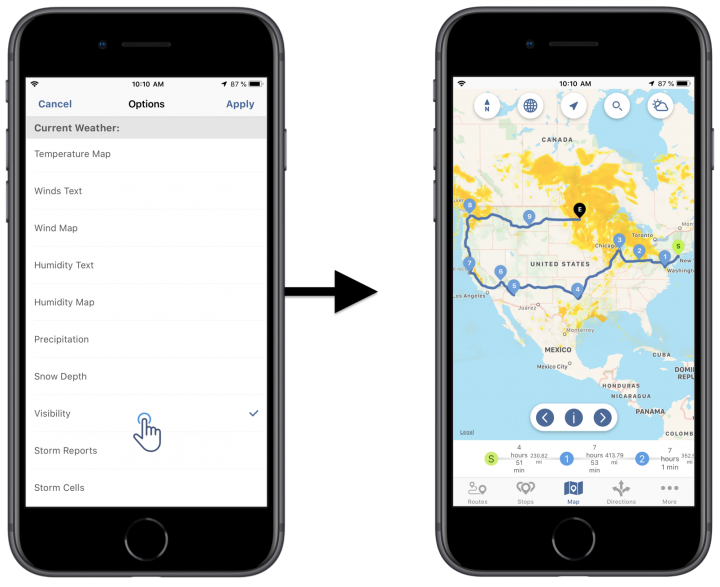 Storm Reports: Displays on the map color-coded dots that represent storm reports in the given areas. To view the details about a particular storm report, tap of the corresponding dot on the map. 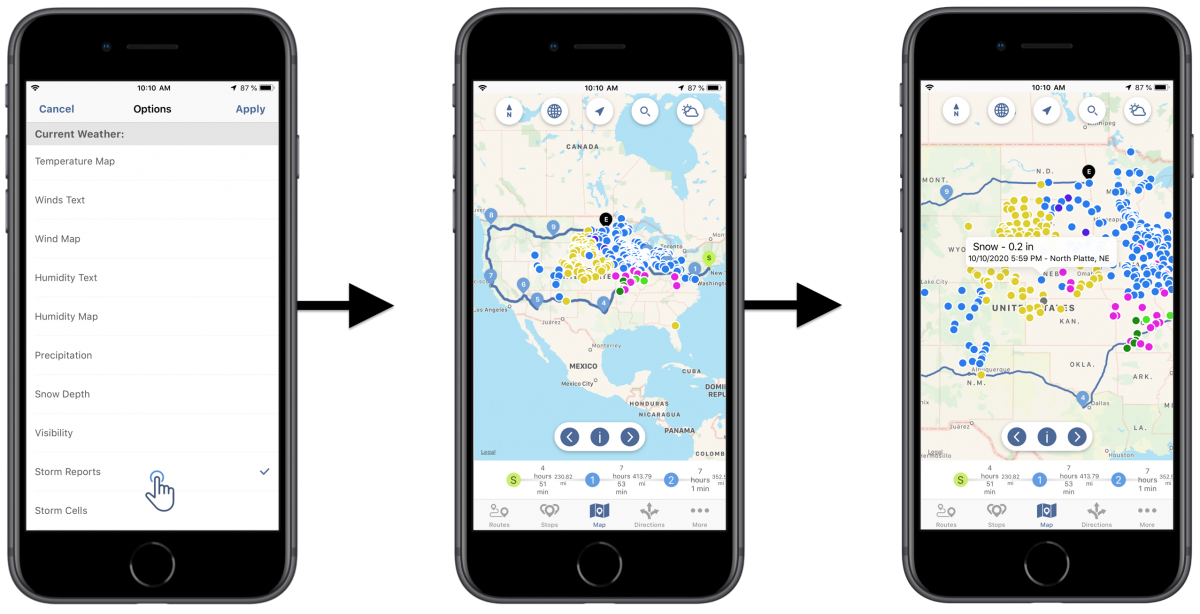 Storm Cells: Displays on the map color-coded dots that represent storm cells and their direction (storm cells are air masses that formed by powerful updrafts and downdrafts moving in convective loops). 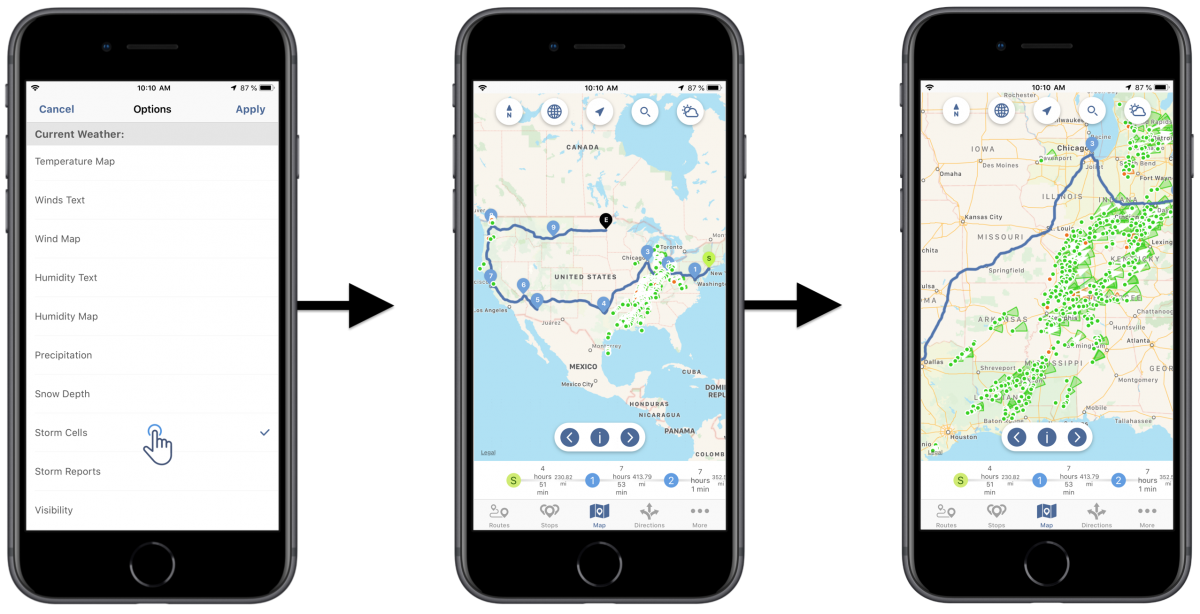 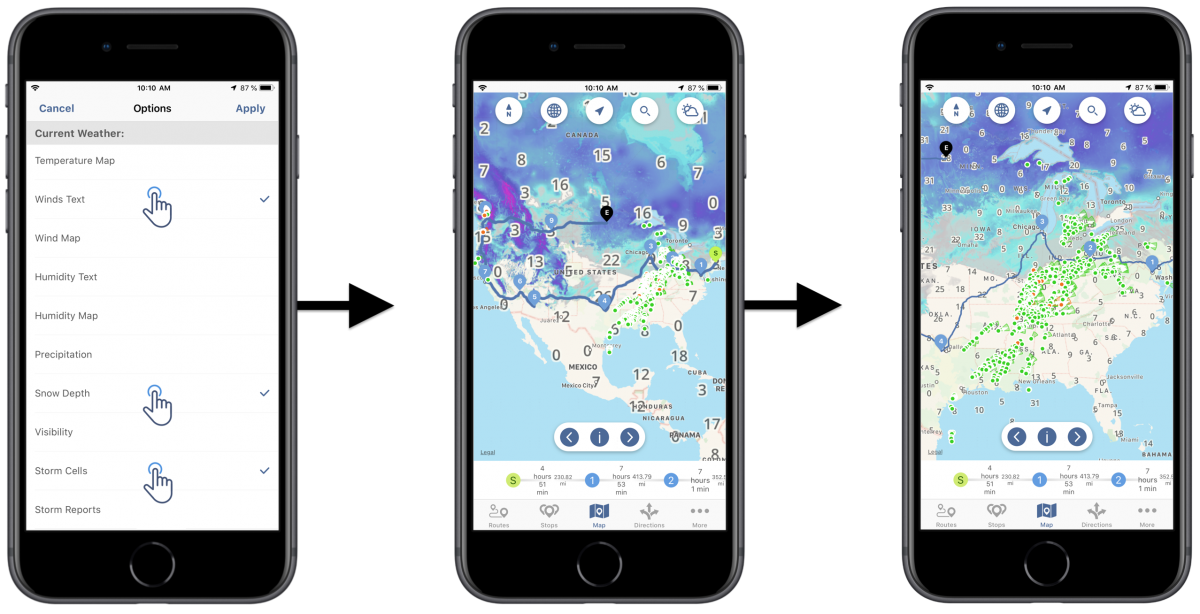