When you complete particular routes and you need to travel back visiting the exact same stops in the exact same sequence, Route4Me’s proprietary optimization engine allows you to reverse multiple routes at a time with any number of addresses in a matter of seconds instead of planning entirely new routes from scratch. Depending on the particular operational needs of your business or unique business model, route reversal can save you a lot of planning time and make your routing process more streamlined. For example, reversing routes can be extremely helpful for businesses that require drivers to travel from one depot to another depot several times and visit the same stops in the same sequence when traveling back and forth. Thus, instead of having several routes for each direction, you can simply reverse the given route and get a new set of directions for visiting the same stops in the same sequence. Moreover, you can view multiple routes one next to another on the Routes Map and reverse them simultaneously.

To reverse multiple routes at a time, first, go to “Routes Map” from the navigation menu and then select the routes that you want to reverse by checking the corresponding boxes. 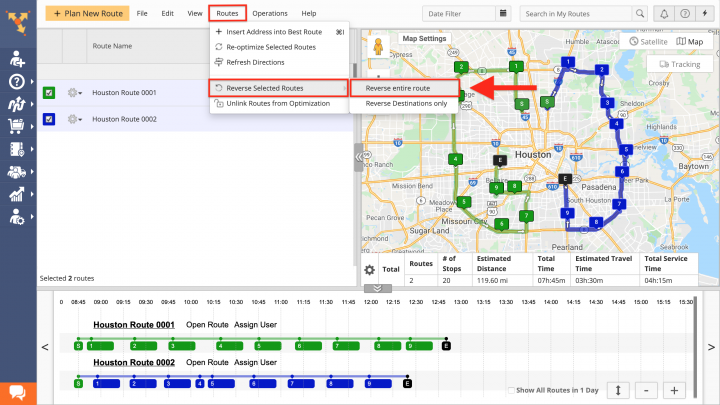 When reversing the entire routes, all stops in each route are reversed including the Start and End stops. When you reverse stops, it means that these stops will be visited in the opposite order/sequence. 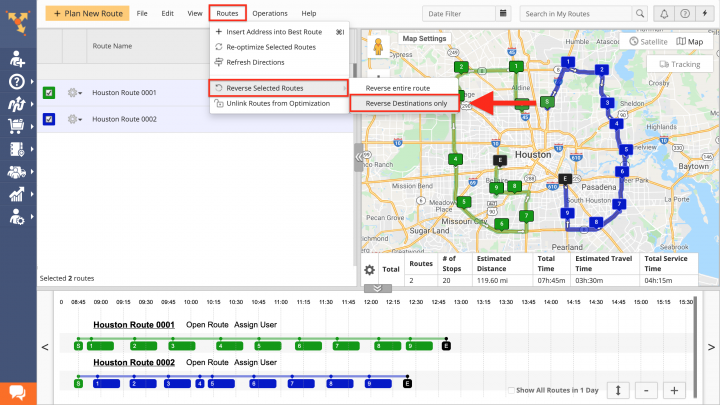 When reversing destinations only, all stops on each route are reversed except for the Start and End stops.

Merge Routes into a Single Route Using the Routes Map