Dropbox is one of the most commonly used cloud-based file hosting services in the world. Since Dropbox is widely used by many businesses of all sizes for storing their information, the Route4Me Route Planner provides direct integration with Dropbox, allowing you to import and optimize your routing data in a fast and effortless manner. Thus, you can import spreadsheets with route data into the system directly from your Dropbox account and then use the imported data for planning and optimizing the most cost-effective routes with Route4Me’s dynamic routing software. Being able to import data into your Route4Me account right from the preferred cloud-based storage enables you to make your route-planning operations more mobile and flexible without having to rely on hard drive storages or being attached to a single computer or mobile device.

To plan one or multiple new routes with the data imported from your Dropbox account, first, go to “Plan New Route” from the navigation menu. 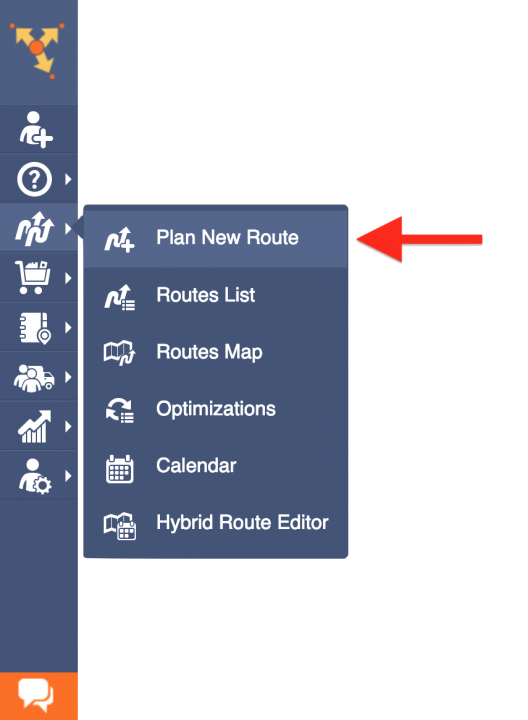 Next, select the “Import Data” option in the corresponding window. 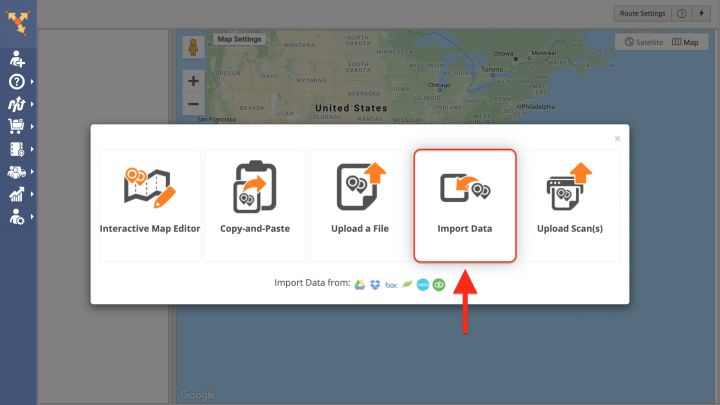 After that, specify the preferred route parameters and then click on the corresponding button to proceed. 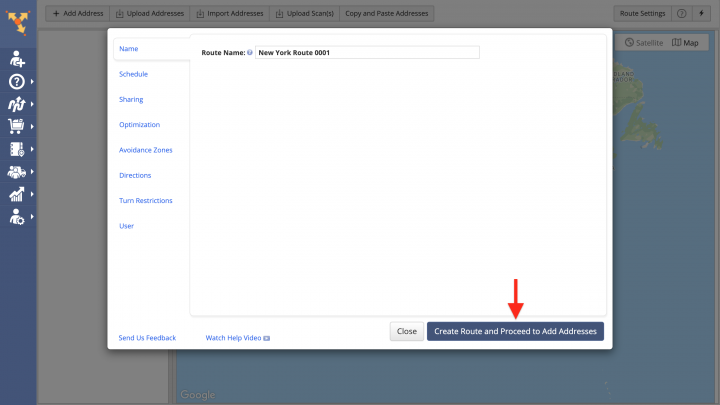 Next, select “Dropbox” from the list of all supported third-party cloud-based storages. 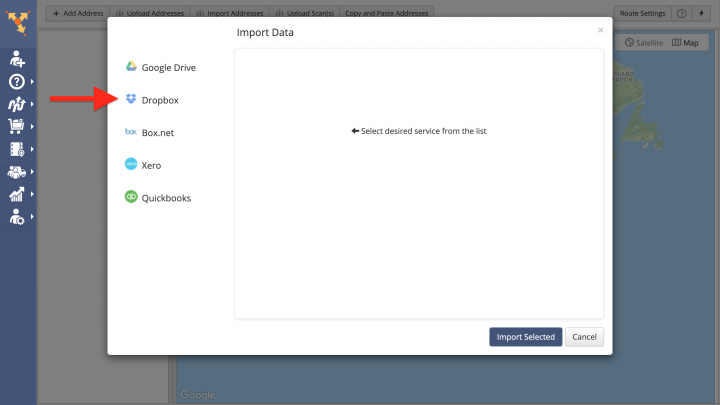 Then, click on the “Authorize” button to establish a connection between your Route4Me and Dropbox accounts. 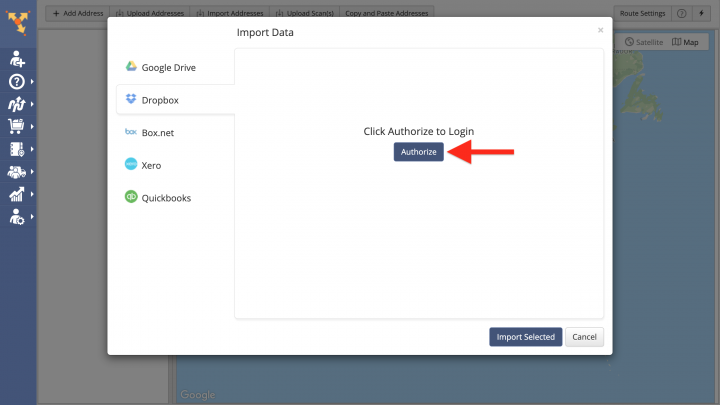 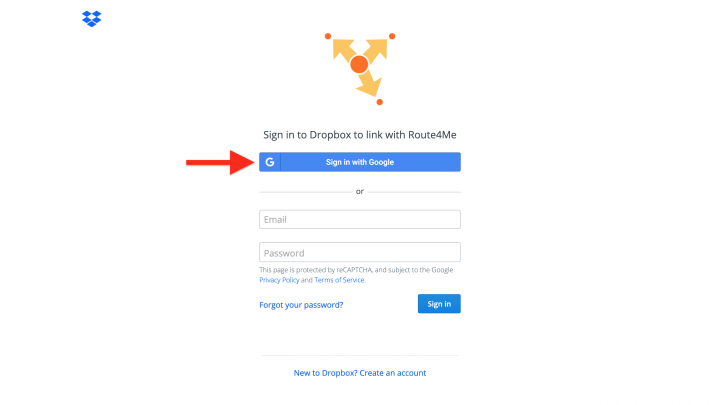 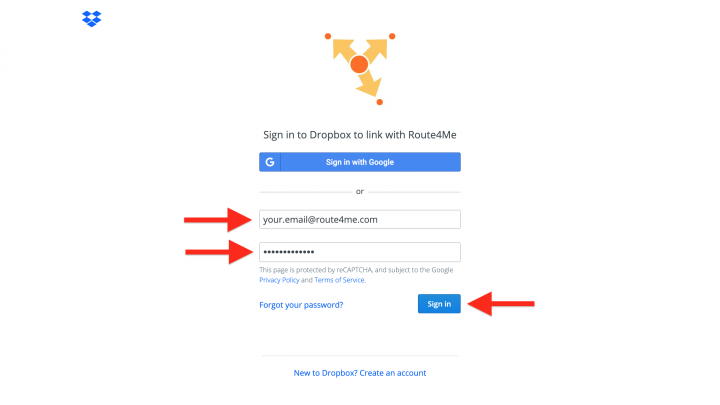 After that, you can use the “Home” root Dropbox directory to navigate through the folders and files on your Dropbox account in order to find and select the file that you want to use for planning and optimizing one or multiple routes. 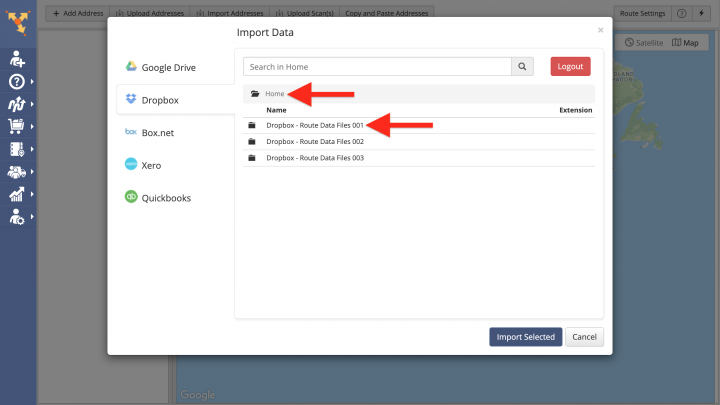 You can also use the search to find the preferred folders by name. 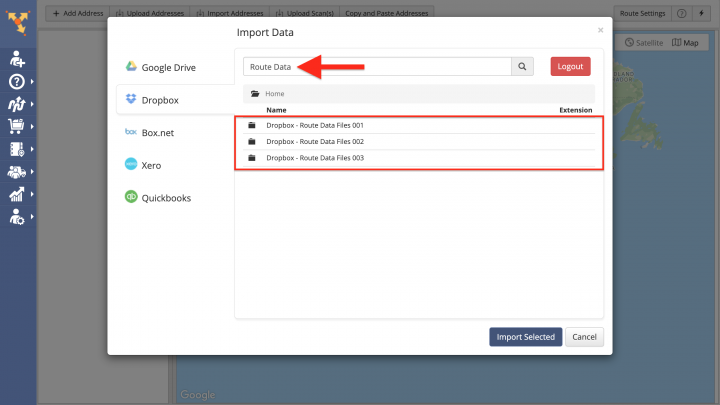 Once you open the preferred folder, you can view all files that are stored in this folder on your Dropbox account. Before importing a particular spreadsheet with route data into the system, make sure that this file is either in CSV, XLS, or XLSX format and that it corresponds to Route4Me’s spreadsheet requirements (learn more). In the “Name” column, you can view the names of all files that are stored in the opened folder, and in the “Extension” column you can view the format of each corresponding file. 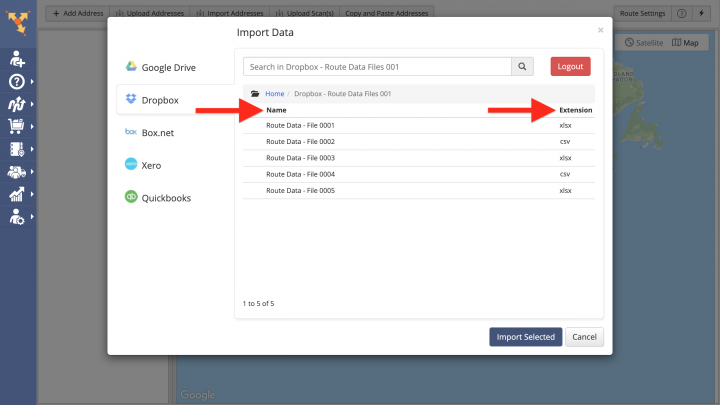 To import a particular file from your Dropbox account into the system, first, click on this file to select it and then click on the “Import Selected” button to proceed. 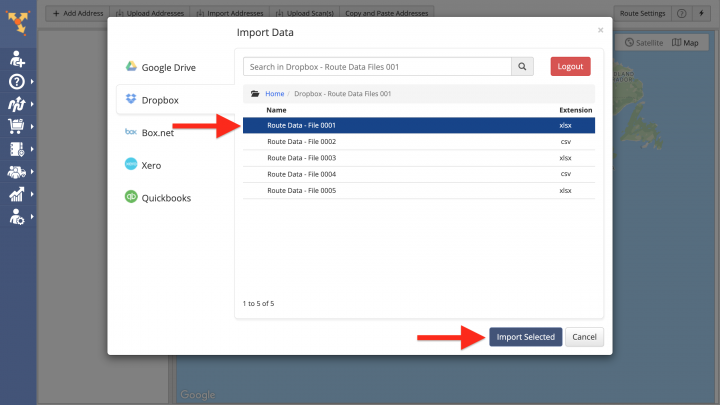 Once you import the selected spreadsheet, Route4Me processes the imported data and displays it in the corresponding window. By default, the system automatically processes all imported data with the “Auto (attempt detection)” Upload Encoding. Alternatively, you can manually match column titles to the data contained in the corresponding columns. To proceed, click on the “Continue to Review” button. 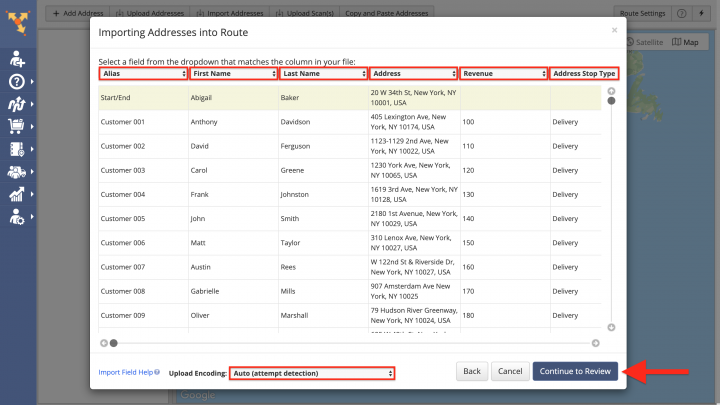 In the “Verify Addresses on Map” window, you can view all imported and processed addresses on the map, as well as check their geocoding statuses. Green colored dots indicate that the corresponding addresses were successfully geocoded with “High Confidence.” The addresses that have yellow or red colored dots next to them should be reviewed and fixed accordingly. After reviewing the imported addresses, click on the “Finish Import” button to plan the route(s).

Once the route is planned, it is optimized and then opened in the Route Editor where you can modify it, as well as added to the Routes List with all your routes. When multiple routes are planned from a single spreadsheet, they are opened on the Routes Map (learn more). 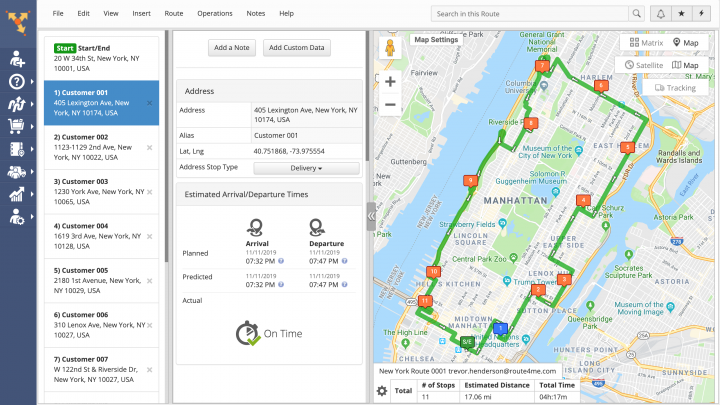