Businesses’ bottom line suffers when employees have too little work, and employee performance can drop when they get too overloaded with work. Thus, in addition to planning routes with the most optimal directions, you also need to figure out the most efficient route stop distribution.

Furthermore, you can then dispatch your balanced routes to drivers’ mobile apps in real-time.

Minimize Number of Routes or Vehicles

To plan a minimal optimal number of routes, in the “Stop Distribution” section, select the “Minimize Number of Routes/Vehicles” option. Next, add the preferred Routing Business Rules, such as Maximum Cubic Volume, Weight, Pieces, Revenue, etc. After that, schedule the routes and specify the rest of the route parameters. 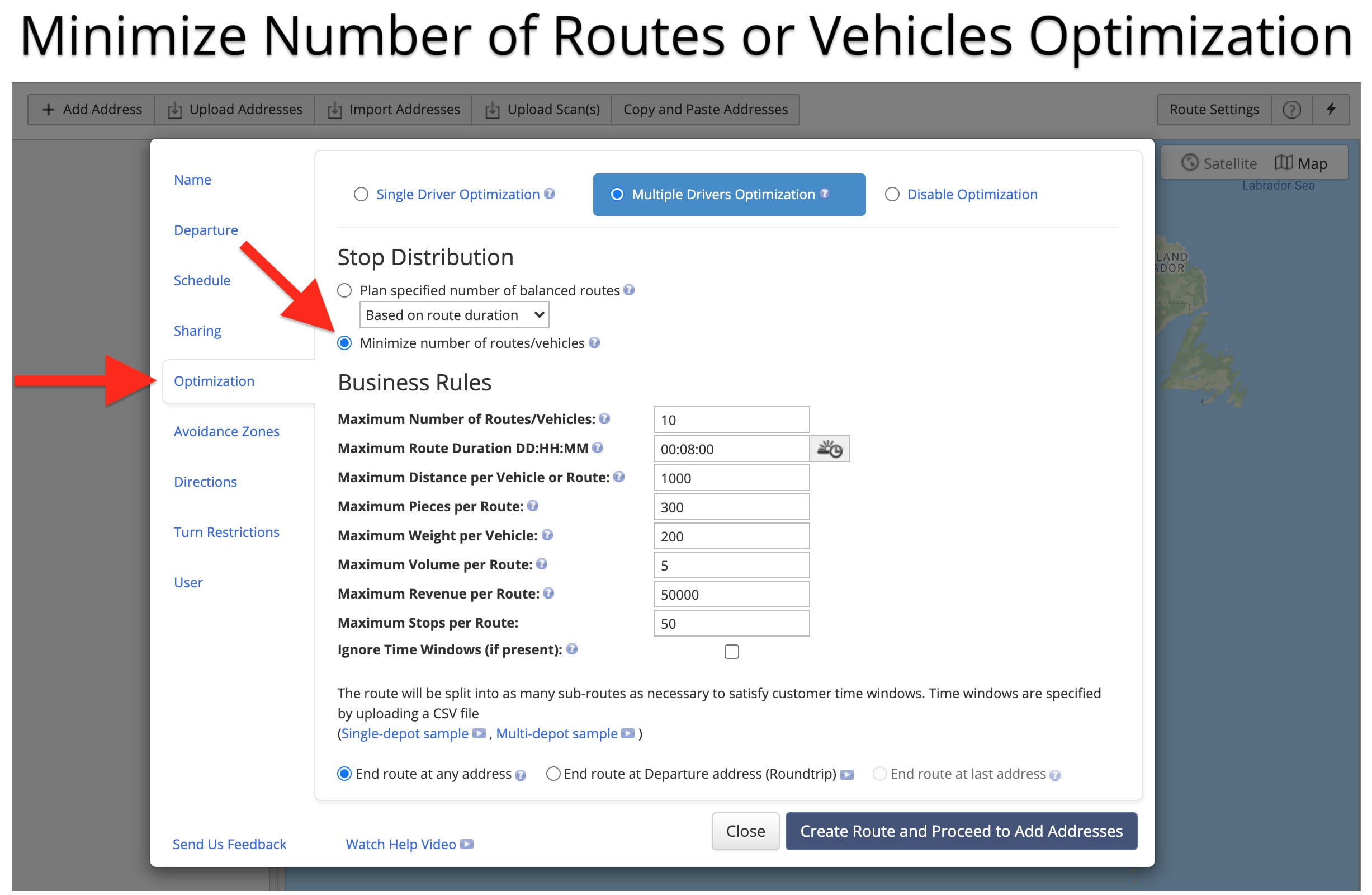 Further, Route4Me will plan the minimal and most optimal number of routes based on the specified routing constraints. Accordingly, Route4Me accounts for such rules and constraints as Time Windows, Service Times, vehicle capacity, and many more. Therefore, you can use the “Minimize Number of Routes/Vehicles” optimization when you want to split all imported addresses into as few routes as possible.

Equally important, when planning a minimal number of routes, the system may output routes with noticeable differences in route distances, travel times, and the number of stops. 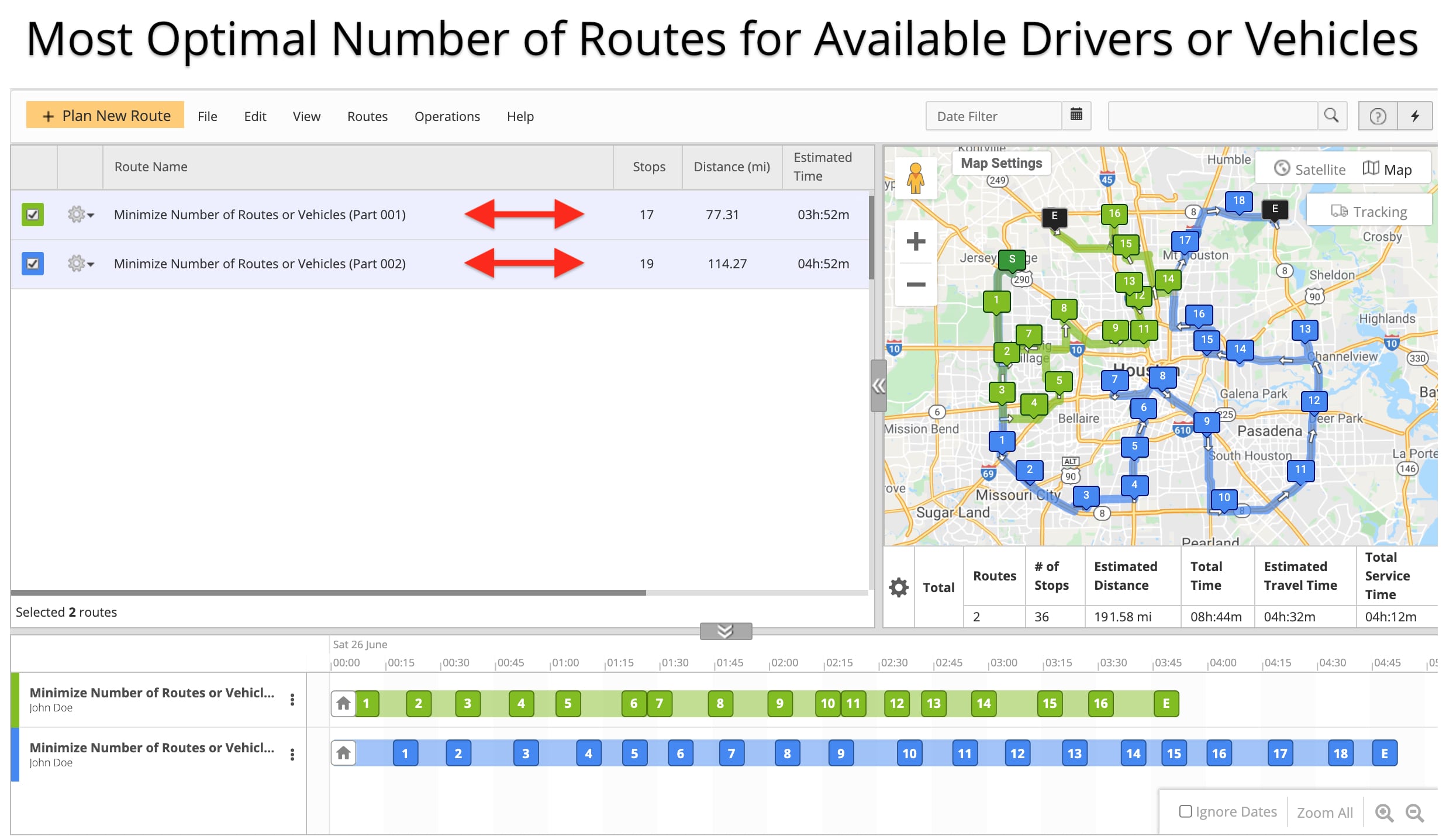 In contrast, Route4Me’s Balanced Route Optimization enables you to specify the exact number of routes you want to plan. Furthermore, you can also specify how you want to distribute route stops within the planned routes:

Route Stops Distribution Based on Number of Stops

First, select the “Based on Number of Stops” stop distribution option. Next, specify the exact number of routes to be planned in the “Maximum Number of Routes/Vehicles” field. Additionally, specify more route constraints and rules based on your routing needs. 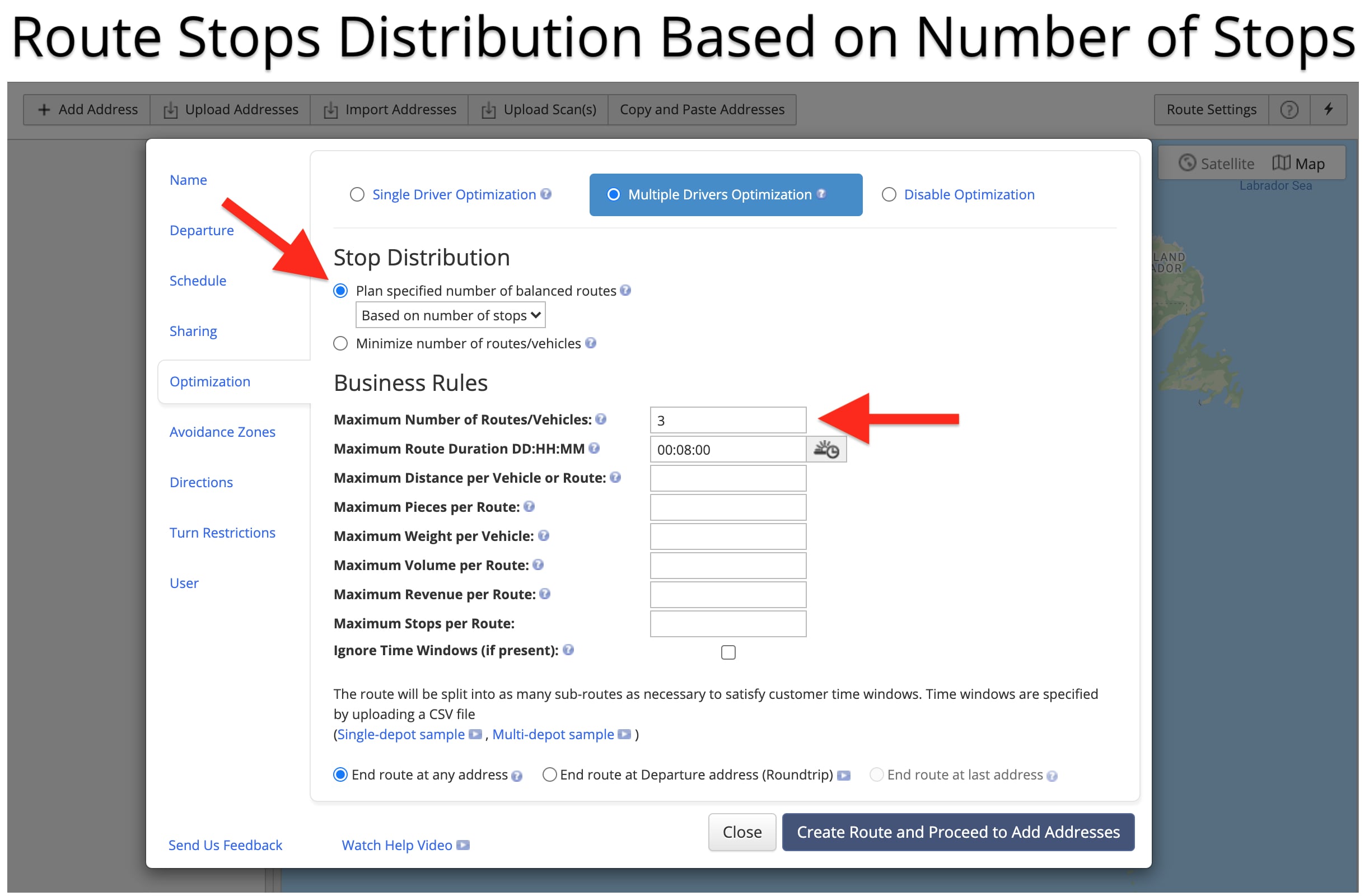 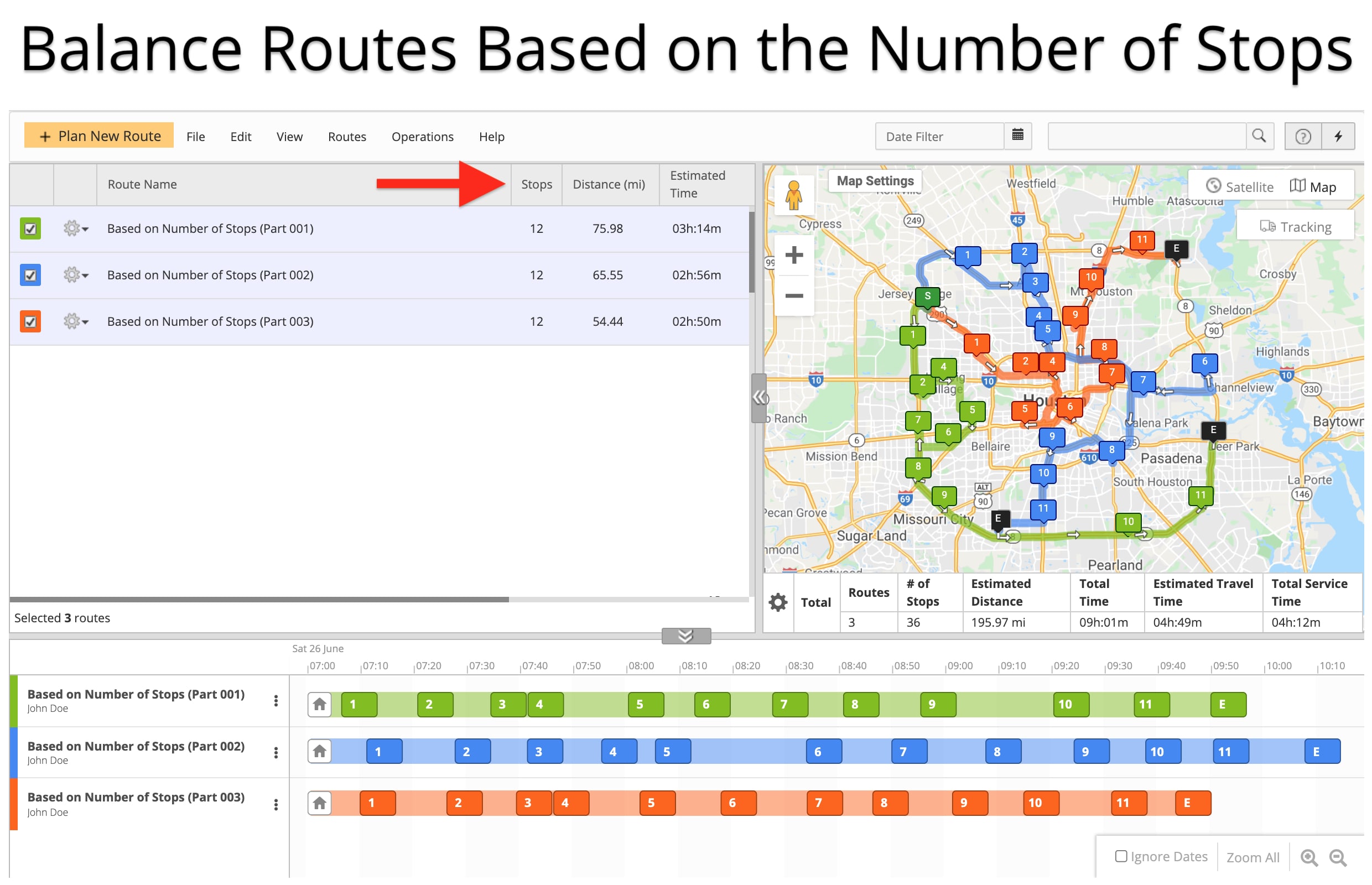 The route stop distribution based on route distance allows you to plan a specific number of routes with almost equal distances.

First, select the “Based on Route Distance” route stops distribution option. After that, specify the number of routes to be planned using the “Maximum Number of Routes/Vehicles” field. Additionally, you can add more route constraints and routing business rules based on your route planning requirements. 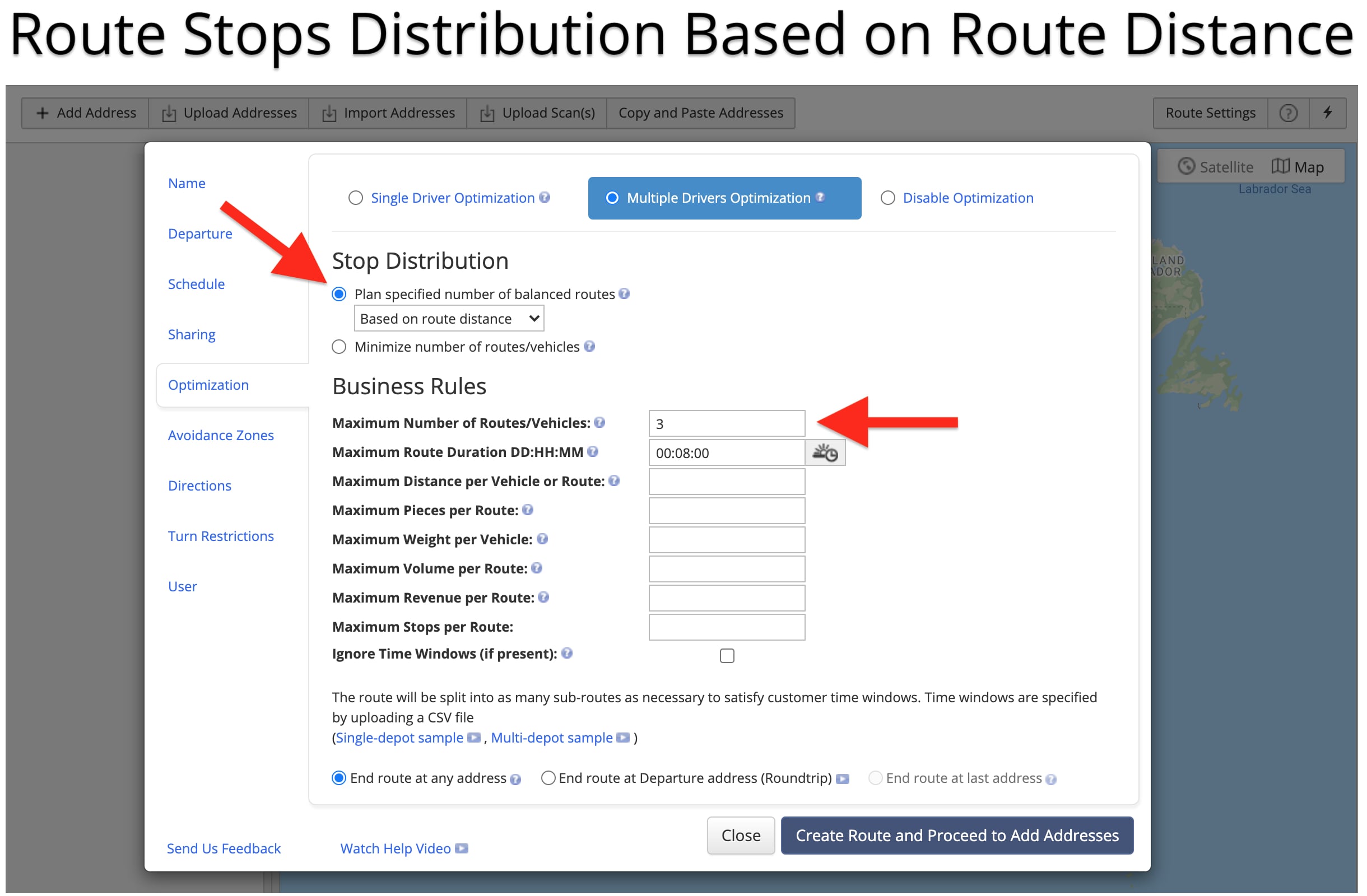 Accordingly, the system will plan exactly the specified number of routes with equal or almost equal travel distance on each route. Another key point, routes with the exact same or almost equal distances may have noticeably different travel times and the number of route stops. This is due to the fact that certain route destinations can have different service times, time windows, etc. 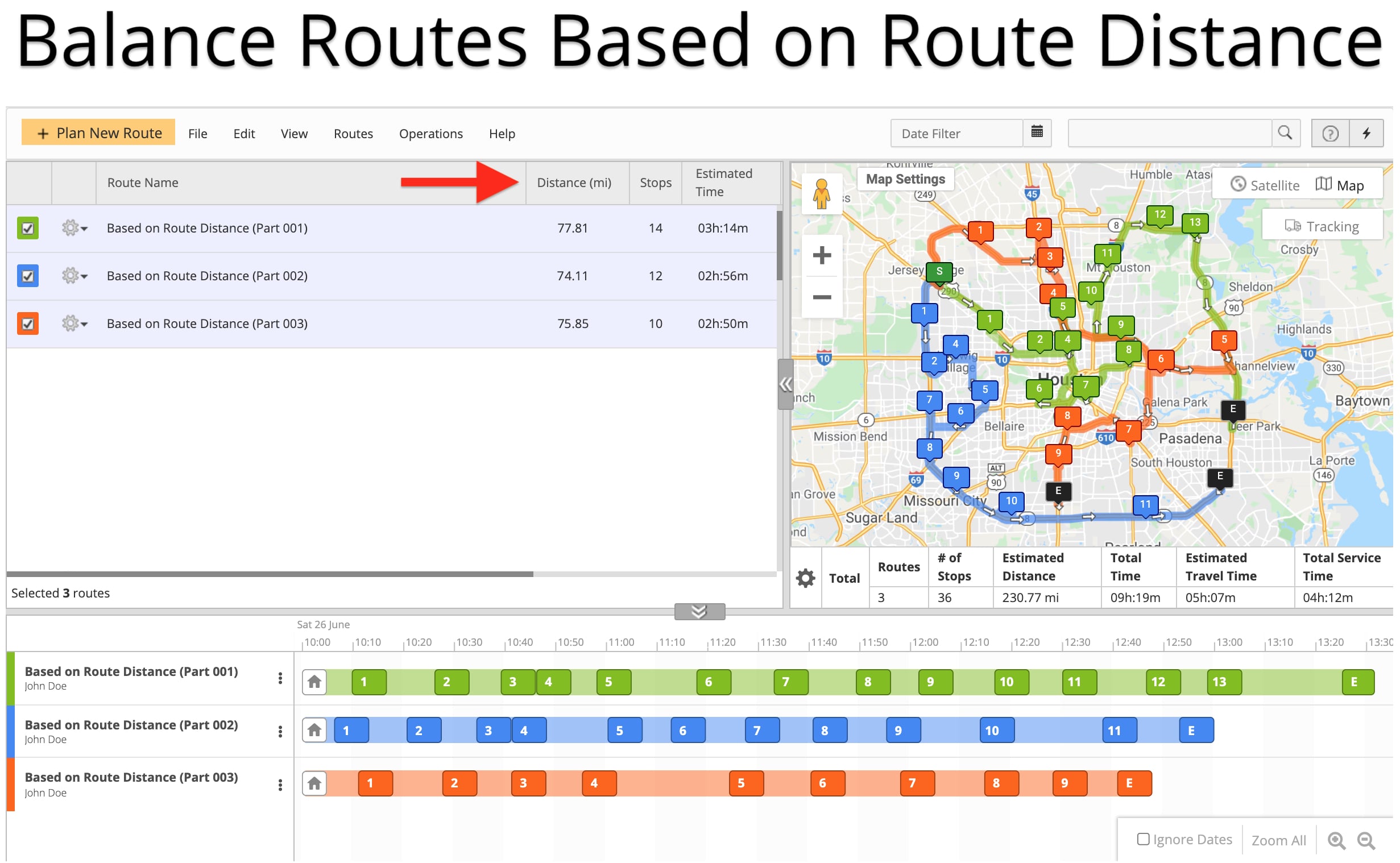 Stops Distribution Based on Route Duration

The route stop distribution based on route duration permits you to plan a specified number of routes with almost equal total route times.

First, select the “Based on Route Duration” route stop distribution optimization parameter. Then, input the number of routes to be planned into the “Maximum Number of Routes/Vehicles” settings field. Then, add the other required route constraints and optimization rules based on your route planning needs. 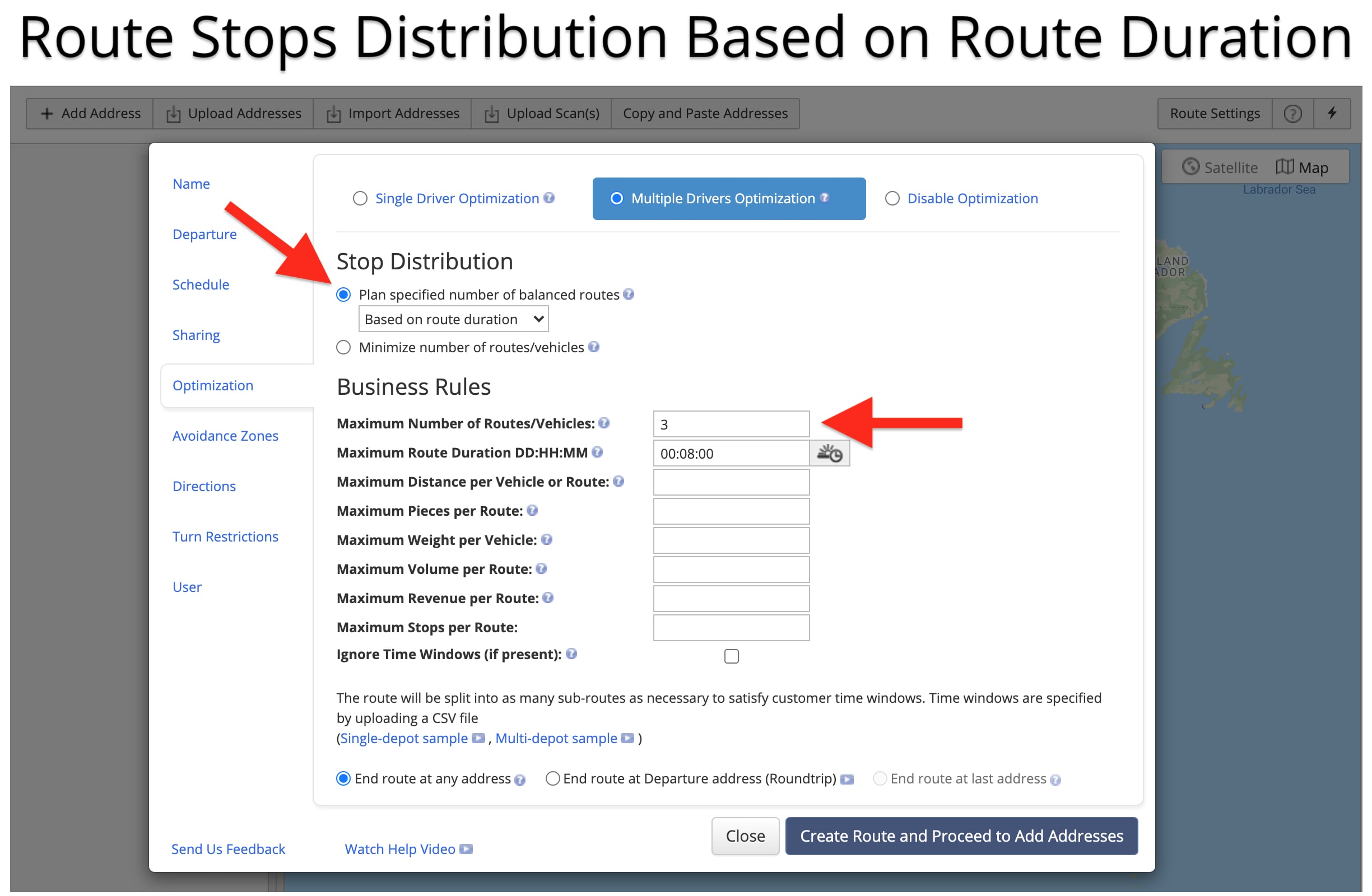 Accordingly, the system will plan and optimize the specified number of routes with equal or almost equal total route time on each route.

Notably, routes with equal or almost equal total route time may have different travel distances and the number of included destinations. That is because you may have route stops with different service times, customer time windows, etc. Another key point, the total route time includes the combination of route travel time and total service time. 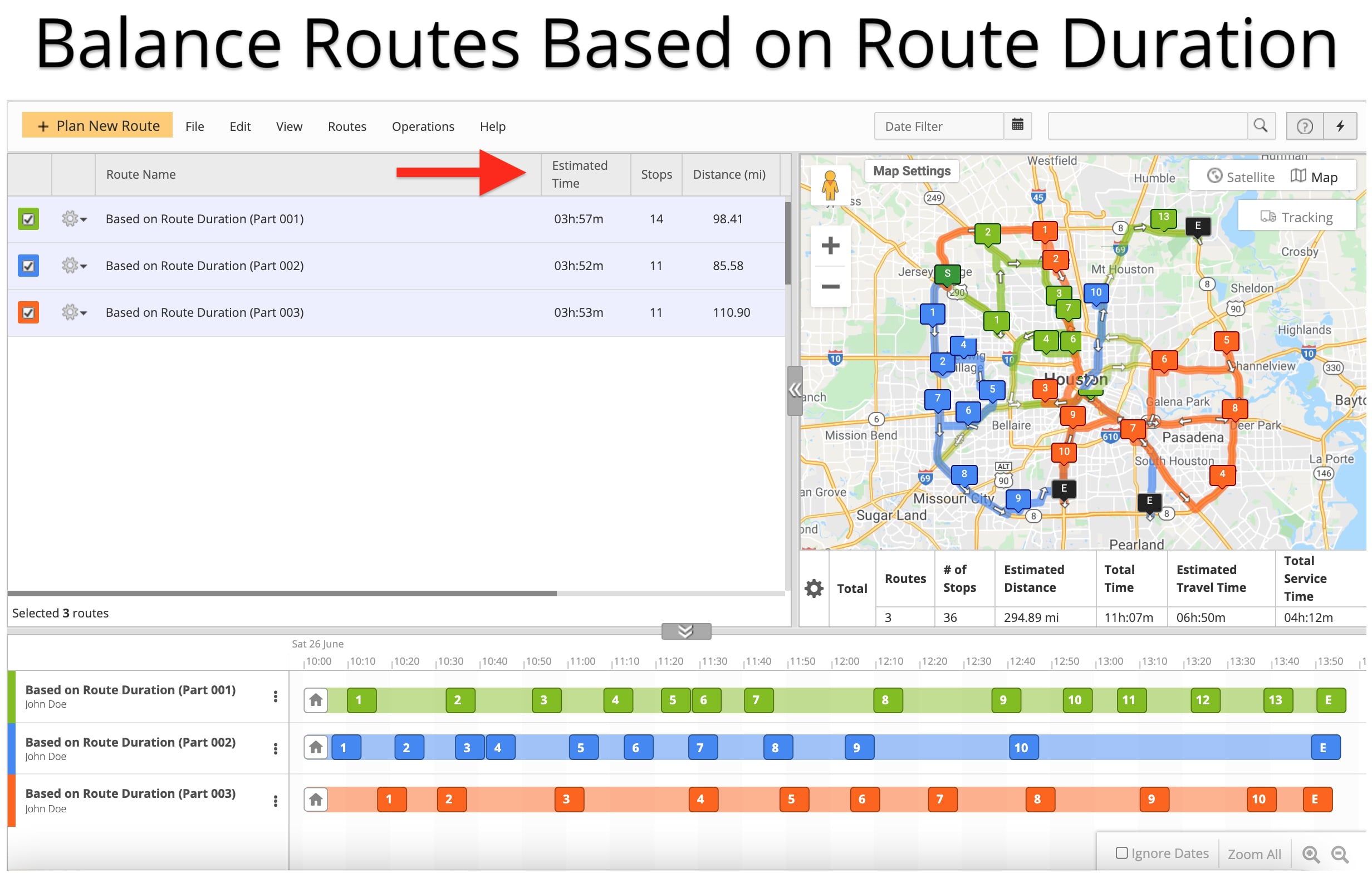 Furthermore, you can dispatch the created balanced routes to drivers and field employees in real-time. To do so, assign drivers or other users to your planned and optimized balanced routes. Once dispatched, the respective balanced routes will instantly become available on the drivers’ mobile apps. After that, they can use Route4Me’s Mobile routing apps to navigate routes, track route progress, and much more.

Additionally, learn more about how to dispatch routes from the Web Platform to Route4Me’s mobile apps. 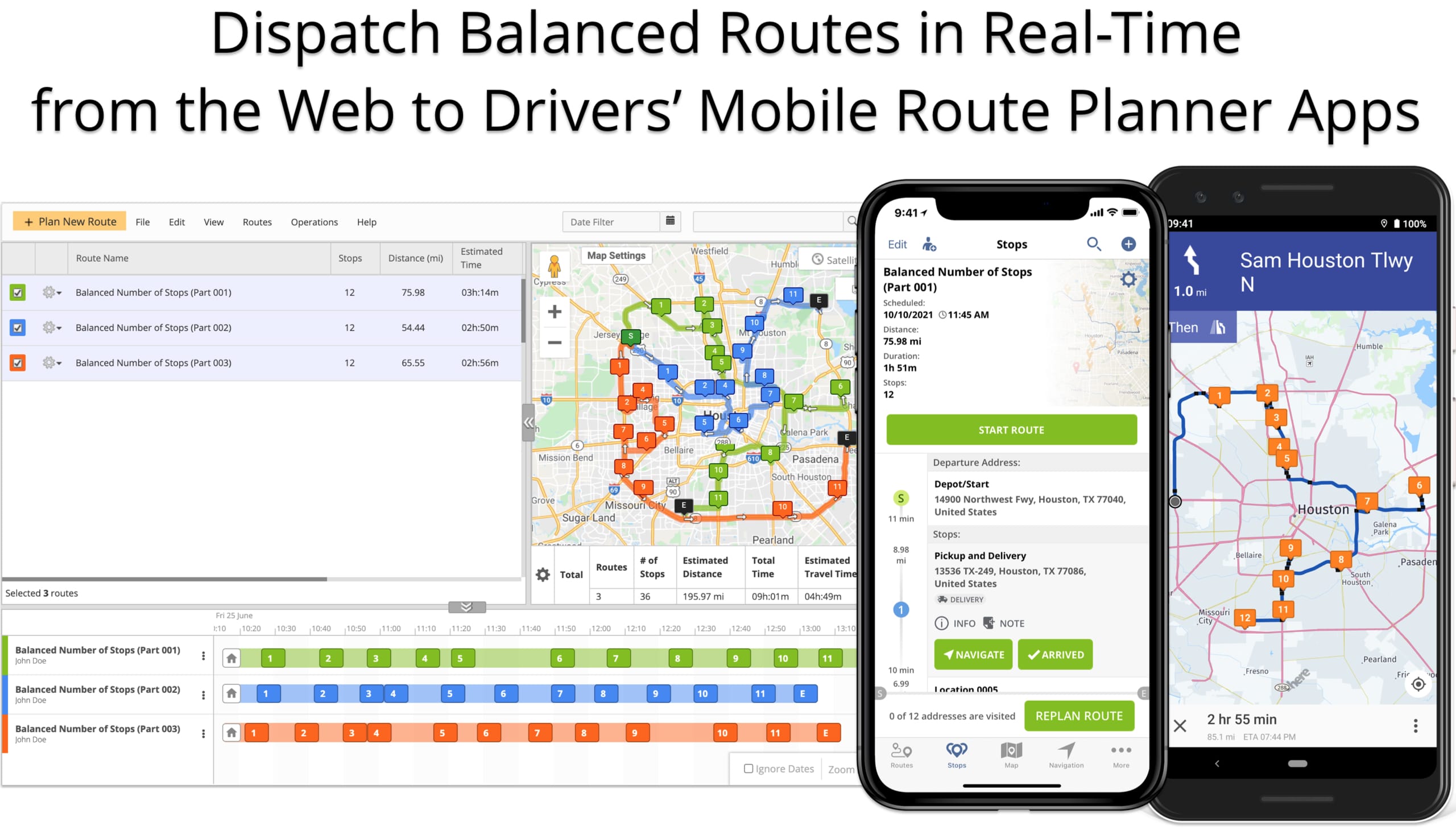 When planning routes with optimization constraints, you may get Unrouted Destinations. Unrouted destinations are the addresses that couldn’t fit into planned routes due to the specified optimization constraints and route parameters. For example, if the number of specified vehicles doesn’t have the needed capacity, there are too many locations, etc.

To troubleshoot unrouted destinations, use one of the following options: 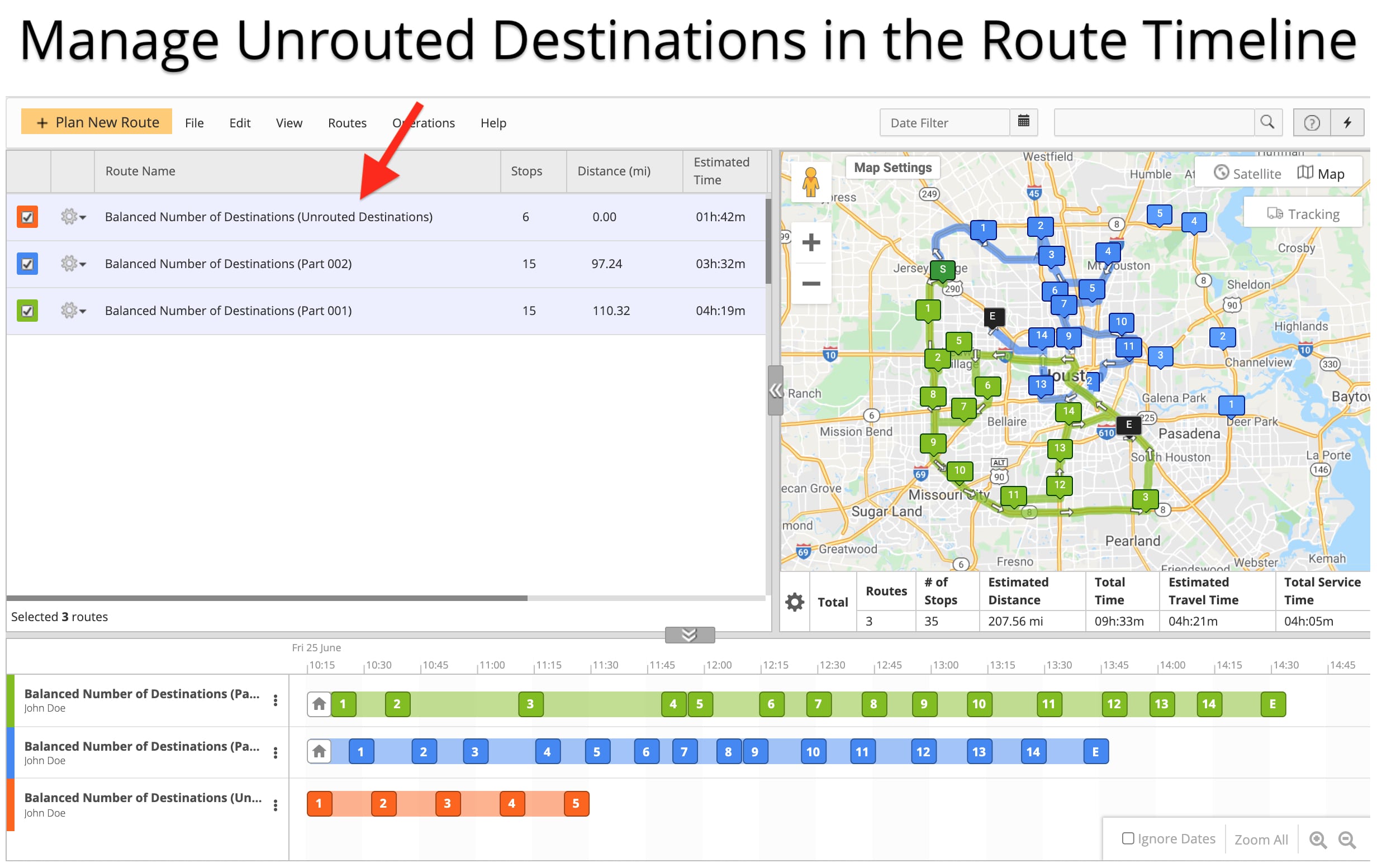