Different industries and business models require different types of routing. Depending on your particular routing requirements and the roads network in your service area, you may need to optimize your routes not only for Driving but also for Bicycling or Walking. Even though bicycles do not have the same carrying capacity or travel range as cars, completing last-mile routes using a bike in the cities with heavy traffic and expensive parking can be more efficient and less expensive than Driving.

Many businesses that are operating in busy cities use bicycles for delivering food, parcels, and other goods, or simply for traveling by bike to different destinations where they provide their services. To plan an efficient bicycling route with multiple stops, you need to solve the Traveling Salesman Problem (TSP) and the Vehicle Route Problem (VRP). And even the simplest 15 stop bicycling route can have millions of possible routing scenarios. That’s why bicycling routes require the same high-level of optimization as driving routes.

To help you win the last mile, Route4Me’s proprietary optimization algorithm permits you to plan and optimize the most cost-effective and time-efficient routes specifically for Bicycling. Moreover, your Bicycling routes can also take into account such constraints as customer Time Windows, Service Times, employee availability, current traffic, weather conditions, and much more.

To plan and optimize routes with Bicycling Directions, first, go to “Plan New Route” from the navigation menu and then select one of the preferred route data import methods: Interactive Map Editor, Copy-and-Paste, Upload a File, or Import Data. To learn more about Route4Me’s spreadsheet requirements, visit this page.

Next, go to the “Directions” tab and then select “Bicycling” from the “Travel Mode” drop-down list.

After that, go to the “Optimization” tab on the left and then select the preferred optimization type: Single Driver Route, Multiple Drivers Route, or Balanced Team Route. Next, specify the rest of the route’s parameters to your preference, import route addresses into the system, and complete the route planning process accordingly (learn more).

When optimizing routes for cyclists, Route4Me’s proprietary optimization algorithm takes into account all predefined settings and constraints, computes through millions of cycling roads and routing scenarios, and outputs one or multiple routes with the most optimal Bicycling turn-by-turn and navigation directions. 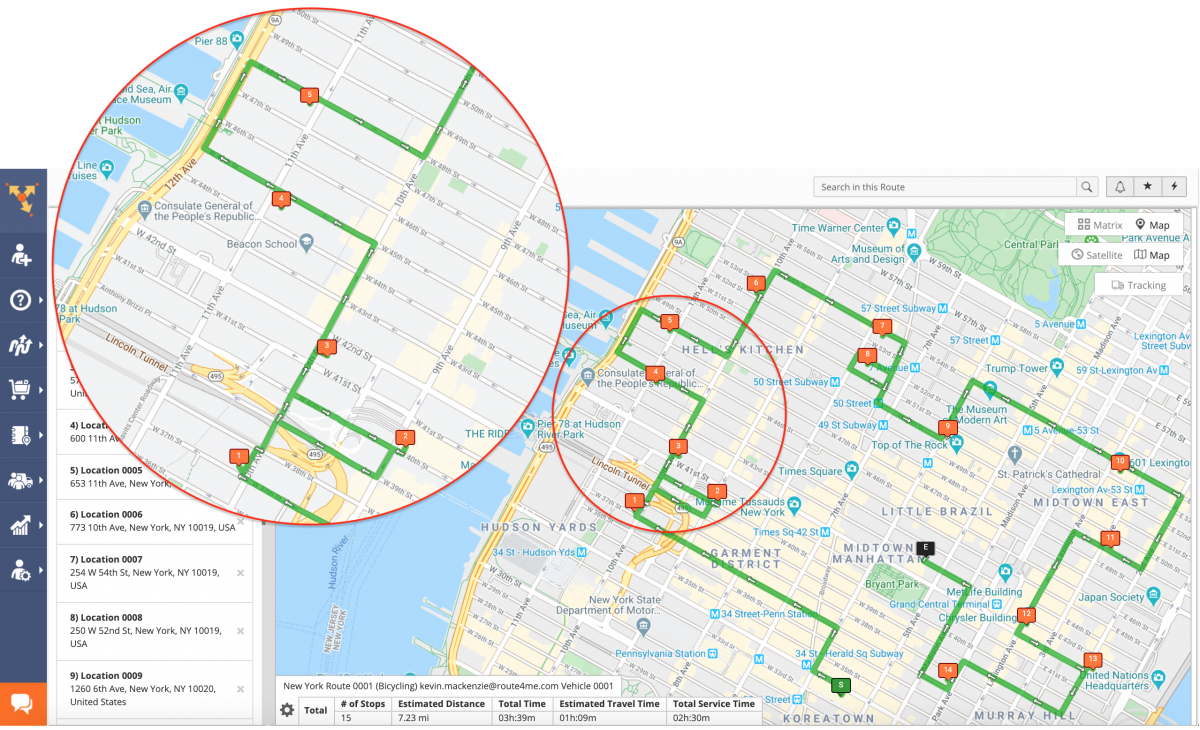 Often, Bicycling routes require riding on the roads that are different from the roads used for Driving. Therefore, those routes that are optimized for Driving will have different navigation directions, arrival times, travel distances, and other route parameters than the routes that are optimized for Bicycling. To re-optimize a Driving route into a Bicycling route (in the Route Editor), first, go to “Edit” in the toolbar and then select “Route Settings” from the menu. To learn more about re-optimizing routes, visit this page.

Next, go to the “Directions” tab on the left and then select “Bicycling” from the “Travel Mode” drop-down list. After that, click on the “Update Route Settings” button to apply the changes.

Once the route is re-optimized from Driving to Bicycling, this route’s ETAs, travel distance, travel time, directions, and other route parameters will change accordingly. Routes that are optimized for Bicycling have different parameters than those routes that are optimized for Driving or Walking due to various factors. Bicycling routes are built based on the roads that are the most suitable for bicycles. Such roads can include regular roads for vehicles, pavements for pedestrians, as well as those roads were Driving a car or Walking is prohibited (i.e., bike lanes, etc.).